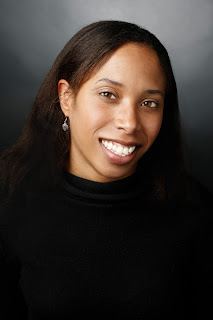 Biography
Fabienne Bastien is currently a Hubble Fellow at Penn State University.  She completed her undergraduate degree at the University of Maryland - College Park.  She later enrolled in the Fisk-Vanderbilt Bridge Program, got her PhD from Vanderbilt University in 2014.  Fabienne recently accepted a faculty position at Penn State, starting in 2017.

Jillian Bellovary*: Your discovery of how stellar brightness variations (“flicker”) correlates with a star’s surface gravity was a real breakthrough in the field of stellar astrophysics.  How did it feel to lead that effort?

Fabienne Bastien: A whirlwind!  In all honesty, this work would not have been possible were it not for missions like Kepler and the community working on the analysis of their light curves.  I'm continually excited about what these data are teaching us, and I try (with varying degrees of success) to keep up with *all* of the papers resulting from these missions and their successors.

Jillian: Please tell me about yourself.  What’s your story?

Fabienne: I am a first generation American, born in Washington, DC to Haitian parents.  I decided to become an astronomer at the age of 4, apparently as a result of a bedtime story: my mother, desperate to get me to sleep, told me to look outside the window and look for my guardian angel.  Anyone who has been to DC knows that the light pollution makes it hard to see very much!  Nonetheless, I was hooked by whatever I saw, and I never veered from this until college.  Books and the Air & Space Museum were my mainstays growing up.

I majored in astronomy in college, and I obtained my Bachelor's degree from the University of Maryland, College Park in 2005.  A few years later, I enrolled in the Fisk-Vanderbilt Master's-to-Ph.D Bridge Program, earning my Master's degree in 2010 and my Ph.D in 2014.  I am currently a Hubble postdoctoral fellow at the Pennsylvania State University, where I have accepted a faculty position to begin August 2017.

Jillian: What are your plans as a professor?
Fabienne:  I have some fairly ambitious science goals. Broadly speaking, I'm very interested in understanding what causes stars to vary in brightness and in using this information to facilitate exoplanet detection and characterization. Surface processes (spots, pulsations, etc.) are responsible for the brightness variations, but these surface processes are largely driven by internal processes. Hence, by studying the brightness variations, we gain insight into the internal physics of stars.

On the other hand, the vast majority of exoplanets are discovered through observations of their host stars, and exoplanet properties, such as mass and radius, are only known relative to those of their host stars. This means that we really need to understand the stars both in order to learn about the characteristics of the exoplanets and in order to make sure that any new world we think we have discovered isn't actually a spurious signal caused by some stellar process.

As a professor, I plan to rely heavily on light curves from space-based missions (Kepler, K2, and the upcoming TESS and PLATO, etc.) in order to study various stellar processes (for example, magnetic activity and surface convection) as well as stellar evolution. I also plan to use these data and what they teach us about stellar behavior to facilitate exoplanet detection and to open previously inaccessible domains to exoplanet discovery.

Jillian: Who inspired you as you were pursuing your career, and how?

Fabienne:  Those who have fun doing science!  A career in science requires a tremendous amount of hard work, and it can be very stressful.  It has therefore been my privilege to encounter people who simply have a blast doing it and who are always excited by new discoveries and ideas.  They help to give me perspective and to remind me of why I'm doing this.
Jillian: What challenges or obstacles have you faced in your career?  How did you overcome them?
Fabienne:  One of the most persistent challenges I face is impostor syndrome.  It has plagued me throughout my career.  I haven't overcome my impostor feelings.  I once allowed them to throw me completely off course.  At some point, though, I started to use them to push myself harder, to a degree that is probably unhealthy but that I am personally willing to accept.

Jillian: People of color, especially women of color, are severely underrepresented in our field.  Can you point to any factors (specific programs, individual mentors, etc.) that helped you succeed?
Fabienne:  I think one of the most important factors was the decision I made, before enrolling in graduate school, that nothing would stop me from obtaining my Ph.D.  After earning my Bachelor's degree, I had essentially given up on my longtime dream of becoming an astronomer, thinking that I just wasn't good enough.  I drifted for a few years, but I kept feeling the pull to try again.  So, I finally caved and decided that I had nothing to lose, but that this time I would go for it with a different mindset.  I even half-jokingly told myself that it was ok for me to be the worst astronomer in the world, as long as I was an astronomer.  I started my way back into the field by volunteering at the Universityof Maryland Observatory.  This eventually turned into a part-time job, then a full-time research assistantship in the Maryland astronomy department, and ultimately led to recruitment into the Fisk-Vanderbilt Bridge Program.

Entering graduate school with that single-minded focus proved critical in helping me overcome the many challenges that came my way.  Life has a way of surprising you with the kinds of problems and obstacles it will throw at you, and I've found that if you don't have something you're absolutely committed to, it's easy for people and circumstances to derail you.

Jillian: Can you share any ideas you have for making astronomy a more equitable and inclusive community?
Fabienne:  I don't have any significant ideas to complement the substantial efforts others are making.  Just reflecting on my own experiences, however, I honestly believe that something as simple as trying to live by the Golden Rule (“do unto others as you would have them do unto you”) can go a long way, if not with recruitment, then at least with retention.  For example, would you like to be on the receiving end of what you're about to say or do?  If not, then think carefully about whether it's worth saying or doing it.  Would you like someone to assume about you what you are assuming about others?  If not, then consider giving others the benefit of the doubt, and consider questioning your assumptions.
Jillian: What advice would you give to young women of color interested in following you path?

Fabienne:  Start where you are, with what you have right now, and hold fast to your dreams.  These aren't my words, but they are words that have helped me, so I am sharing them.  Do your best to make the most of every situation, and if you are proactive, persistent and determined, lots of doors will unexpectedly open for you.  Another lesson I've learned is this: the greater your level of mental fortitude, the greater your chances for success.  You can overcome many obstacles, including coming up from behind, if you want something badly enough and if you are willing to endure enough.  My late grandfather exemplified this, and I think of his story often, but many people have written down their stories in books and in articles: these are treasure troves of information and excellent companions on any journey.

Jillian: Any final words?
Fabienne:  I owe a debt of gratitude to all those who have helped me along the way, including faculty at the University of Maryland, the Fisk-Vanderbilt Bridge Program, the NASA Harriet Jenkins Graduate Fellowship Program, and the Kepler Science team.  I would also like to thank all of those who believed in me, encouraged me and were willing to give me a chance.

* Jillian Bellovary is an assistant professor at Queensborough Community College and a research associate at the American Museum of Natural History.  She is also a member of the Committee on the Status of Minorities in Astronomy (CSMA).
Posted by Jillian at 7:33 AM