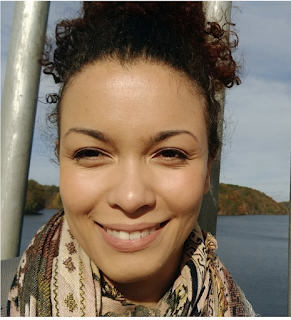 The American Astronomical Society's (AAS) Division for Planetary Sciences (DPS) is thrilled to recognize Dr. Jasmine Bayron, from the American Museum of Natural History and City University of New York. Dr. Bayron is the first awardee from the new Joint Speaker Program established between DPS and the National Society of Black Physicists (NSBP), Earth and Planetary Systems Sciences (EPSS) section, based on her excellent NSBP 2021 meeting presentation, “Moapa Valley (CM1): The Black Box of the CM Parent Asteroid.” As the Joint DPS-NSBP Program Speaker, Dr. Bayron has been invited to speak at the DPS 2022 meeting, with expenses covered by DPS. She also will be speaking at the Howard University Physics Department Colloquium Series, with support provided by the Planetary Geology, Geophysics and Geochemistry Laboratory at NASA Goddard Space Flight Center. The full AAS press release on Dr. Bayron’s selection can be found at https://dps.aas.org/news/inaugural-dps-nsbp-speaker-awardee-dr-bayron and information about the DPS-NSBP partnership can be found at https://dps.aas.org/leadership/nsbp_parnership.

Happy March y'all! It's no longer the official Black History Month, but Black excellence is the past, present and future. It's ongoing and we want to keep highlighting amazing Black scientists! Today we have Derod Deal!

Happy Black History Month! We know we've come to the end of February, but Black excellence is to be celebrated every day of the year. We'll post our remaining interviews and more in the coming weeks. Next up: Caleb Levy!

Happy Black History Month! As we celebrate Black ancestors, leaders, creators, teachers, and scientists who are our bedrock and inspiration, we also want to uplift the brilliant members of our astrophysics community who are our Black Present and Black Future. We'll be posting interviews over the next couple of weeks of several scientists, talking about their work, what inspired them to pursue science, and what Black History Month means to them. First up: Kiersten Boley.

Read more »
Posted by Erin Flowers at 1:50 PM No comments:

Justice and Equity for Black People in the United States

If you do not actively and consistently assist, advocate, or support Black People and Black Communities in your regular activities then you are part of the problem.

Dr. Martin Luther King Jr. stated, "He who passively accepts evil is as much involved in it as he who helps to perpetrate it. He who accepts evil without protesting against it is really cooperating with it."

George Floyd, Breonna Taylor, Tony McDade, and Ahmad Aurbery are just four of the countless Black lives that were lost due to police brutality and, more importantly, not given the justice they deserved. These are not isolated incidents, and they stem from a much longer and broader history of the erasure of Black humanity in this country.

You may ask, "Where do I even start?" Well, the first step is education. African American descendants of slaves have generated over a Trillion dollars (conservative estimates) in wealth to the American Colonies and the United States since the first documented slaves were brought to the continent around 1619 (article link). Restitution, reperations (not just monetary), and reconcilliation were never fully achieved even after the so-called abolishment of slavery with the 13th Amendment (video link) after the U.S. Civil War. The Reconstruction Era (video link) was supposed to accomplish this, but white America broke the promise to Black America.

Hence, the frustration seen in the streets of these cities is not new, has continually been brewing for decades, and is a result of perpetual discrimination in many aspects of American society, including but not limited to:

These information links are all introductory and by no means equivalent to the exhaustive studies, articles, and investigations that have been conducted. The intent is to spark your interest in learning more and then taking action. All of these areas need to be repaired for true reconciliation to occur. Thus, there have been, are, and will be numerous opportunities for you to develop, fund, and volunteer your time for programs, initiatives, and events that benefit Black People and the Black Community. The choice is up to you to pick which ways you want to contribute, but pick some and work to Make America Great (M.A.G.) for the FIRST time!

For those who are able to put their money to action, here is a non-exhaustive list of donation opportunities:

This statement is co-signed by members of the American Astronomical Society (AAS) Committee for the Status of Minorities in Astronomy (CSMA), in alphabetical order:

The views and opinions expressed in this statement and links to related materials are those of the authors alone and do not necessarily reflect the policy or position of the American Astronomical Society.

In preparation for AAS 235: Reflections from CSMA Co-Chair

The AAS Committee for the Status of Minorities in Astronomy is deeply committed to advocating for minoritized groups in our profession, as well as developing and educating allies within our community. As part of this mission, we feel it is imperative to acknowledge that astronomical facilities occupy Maunakea, a sacred site for Native Hawaiians that is also the most valued ground-based research location for many astronomers from around the world. It is important to recognize that the TMT construction and continued occupation of Maunakea is just one facet to the history of land use in Hawai’i, and thus should be viewed in the larger context of colonization.

We also wish to acknowledge the spectrum of viewpoints and complex relationships that Native Hawaiians have with the astronomy research community. Hawaiian peoples also have a long history of technological prowess and astronomical navigation. We strongly encourage all astronomers, particularly those who will be in Honolulu for the AAS meeting this January, to engage respectfully with Hawaiian culture by listening to the local dialogue and engaging in Hawaiian ways of thinking.

We strongly encourage AAS attendees to familiarize themselves with the Envision Maunakea report, which was distilled from a set of open listening sessions meant to engage the Maunakea community in productive dialogue.

On October 31, CSMA hosted a speaking session on the culture of Maunakea at the annual SACNAS meeting (Society for the Advancement of Chicanx/Hispanics and Native American Scientists), which also took place in Honolulu. As the largest gathering of Native American STEM researchers in the country, this meeting offered the opportunity to engage and support Native Hawaiian scientists in unprecedented ways. We list here a short summary of lessons learned from this event.

This collection of  resources was led by Dr. Brittany Kamai for the SACNAS 2019 conference attendees. Input was recieved from a spectrum of views of Native Hawaiians and astronomers. This is not a comprehensive list rather a starting point. We recieved permission to share this list here.
https://drive.google.com/file/d/1bk39SuN8RBhhdDgjeHAClLg629c8AKav/view?usp=sharing

Detours: A Decolonial Guide to Hawai’i

The views and opinions expressed in this statement and links to related materials are those of the authors alone and do not necessarily reflect the policy or position of the AAS or all individual CSMA members.
Posted by Lía Corrales at 12:46 PM No comments:

On Wednesday, July 17th, 2019 riot police arrested dozens of Kānaka Maoli
(Native Hawaiian) elders who were peacefully protesting the construction of the
Thirty Meter Telescope (TMT) on Mauna Kea. Land protectors continue to resist
in the face of military force after Governor David Ige declared a state of emergency
and ordered the National Guard.

Along with racist, islamophobic, and anti-immigrant rallies hosted by the U.S.
president as well as human rights violations by immigration officers at the U.S.
border, these arrests are a continuation of the United States’ long and dark
tradition of scientific imperialism and colonization. The “controversy” surrounding
TMT has never been about science vs. religion - a dismissive, anti-Indigenous
argument that has been used to defend the economic and political interests of this
project. Rather, it is an issue of Hawaiian sovereignty.

As members of the Committee on the Status of Minorities in Astronomy (CSMA),
we stand with the Kānaka Maoli land protectors. We implore the astronomy
community to consider the cost of valuing research objectives above human beings.

Please read, sign, and share widely the Open Letter Opposing Criminalization of
Mauna Kea Protectors written by graduate students Sal Wanying Fu and Mia de los
Reyes. We thank Sal and Mia for their emotional labor in putting this together.

You may also consider donating to the Mauna Kea Legal Defense Fund to support
Kānaka Maoli activists on the ground.

The above signatories are private citizens exercising their constitutional right to
express their personal views. This is not an official statement by the CSMA nor the
AAS and should not be construed as such.

Video of Kānaka Maoli Arrests (shared by @KaraokeComputer on Twitter)

Hawaii Telescope Protesters Don’t Back Down After Arrests

Maunakea: Redirecting The Lens Onto The Culture Of Mainstream Science

The Fight For Mauna Kea And The Future Of Science