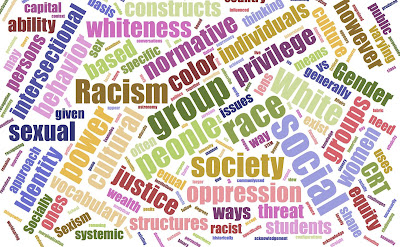 The purpose of this blog is to educate the scientific community about race, racism and the issues faced by people of color in STEM generally, and astronomy more specifically. We recognize that our culture and society do not equip people with the vocabulary and historical knowledge to engage in conversations about race and racism in a cogent or constructive manner (e.g. Bonilla-Silva 2010). Because of this it is important to lay out some commonly-used vocabulary words that will appear in future posts. Because we subscribe to an intersectional approach to our antiracism work, we provide vocabulary pertaining to social justice issues beyond race.

This list is not meant to be exhaustive, but rather a springboard for future discussions and posts. If you encounter words and terms that are unfamiliar, we encourage you to do a quick Google search.

Multiculturalism - A way of thinking about gender/race/sexuality/physical ability that examines differences between groups with the aim of promoting diversity by celebrating differences. Multiculturalism generally does not acknowledge historical barriers to equity and inclusion, nor systemic oppression.

Identity politics - Focusing on one’s specific identity group and its challenges as a means of improving equity and inclusion in the larger population for that specific group. In this framework, justice is often seen as a zero-sum game, such that the acknowledgement of e.g. racism necessarily detracts from recognition of sexism.

Intersectional feminism - The view that women experience oppression in varying configurations and in varying degrees of intensity. Cultural patterns of oppression are not only interrelated, but are bound together and influenced by the intersectional systems of society. Examples of this include race, gender, class, ability, and ethnicity. (Kimberlé Crenshaw)

Social Justice - The belief that all people should have equal social, political and economic opportunities. A social justice approach to diversity recognizes that there does not currently exist equal opportunities due to systemic oppression of certain groups in our country, both historically and currently. Because of this, social justice can be achieved only by recognizing, challenging and removing the barriers to inclusion and equity. Once this is done, diversity will follow.

Critical race theory (CRT) - A framework for understanding social structures and institutions that recognizes that racism is engrained in the fabric and system of the American society. The individual racist need not be identified to recognize that institutional racism is pervasive in the dominant culture. This is the analytical lens that CRT uses in examining existing power structures. CRT identifies that these power structures are based on white privilege and white supremacy, which perpetuates the marginalization of people of color. (UCLA School of Public Affairs)

Cultural Materialism - A way of thinking that posits that the ways we think about things---what we "know" about the world---spring from the ways we live; produce food, capital and wealth; and reproduce. In the context of race and racism in the United States, cultural materialism recognizes that the historical means by which our country produced capital and wealth---agriculture via slavery and individual wealth through racially exclusive public policies---shape present-day society (Halley, Eshleman & Vijaya 2011

Social construct - an idea or notion that appears to be natural and obvious to people who accept it or benefit from it, but may or may not represent reality, so it remains largely an invention or artifice of a given society. CRT and intersectional feminism recognize that race, gender and binary sexuality (white vs non-white; gay vs straight) are social constructs with no biological basis. However, because society uses these constructs to shape societal outcomes and the distribution of power, these constructs nonetheless matter in the lives of oppressed individuals.


Social Power - The ability of a social group to attain what they need and want, as well as to limit the opportunity and choices of other groups, thereby shaping their social outcomes.

Race - a socially constructed phenomenon, based on the erroneous assumption that physical differences such as skin color, hair color and texture, and facial [or other physical] features are related to intellectual, moral, or cultural superiority. The concept of race has no basis in biological reality and, as such, has no meaning independent of its social definitions (Calgary Anti-Racism Education; Henry & Tator, 2006, pp. 46-67).

Racism - An ideological, structural and historic stratification process by which the population of European descent, designated as “white,” through its individual and institutional power, has been able to sustain, to its own best advantage, the dynamic mechanics of upward or downward mobility to the general disadvantage of the population designated as non-white. Racism does not exist without a power differential, so while, say, Latin@ people can be prejudiced against white people, they cannot be racist against whites because they lack the social, economic, and political power necessary to shape white choices and outcomes.

Privilege - A group of unearned cultural, legal, social, and institutional rights extended to a group based on their social group membership. Individuals with privilege are considered to be the normative group, leaving those without access to this privilege invisible, unnatural, deviant, or just plain wrong. Most of the time, these privileges are automatic and most individuals in the privileged group are unaware of them. Some people who can “pass” as members of the privileged group might have access to some levels of privilege.

Whiteness (White culture) - "Whiteness," like "color" and "Blackness," are essentially social constructs applied to human beings rather than veritable truths that have universal validity. The power of Whiteness, however, is manifested by the ways in which racialized Whiteness becomes transformed into social, political, economic, and cultural behavior. White culture, norms, and values in all these areas become normative natural. They become the standard against which all other cultures, groups, and individuals are measured and usually found to be inferior (Calgary Anti-Racism Education; DiAngelo 2012).

White fragility - A state in which even a minimum amount of racial stress becomes intolerable, triggering a range of defensive moves. These moves include the outward display of emotions such as anger, fear, and guilt, and behaviors such as argumentation, silence, and leaving the stress-inducing situation.

White spaces - white spaces vary in kind, but their most visible and distinctive feature is their overwhelming presence of white people and their absence of [people of color]. When the anonymous PoC person enters the white space, others there immediately try to make sense of her or him—to figure out “who that is,” or to gain a sense of the nature of the person’s business and whether they need to be concerned. In the absence of routine social contact between PoC—Blacks and Latinos in particular—and whites, stereotypes can rule perceptions, creating a situation that estranges PoC (Anderson 2015)

Normative - Establishing, relating to, or deriving from a social standard or norm, especially of behavior. Behavior that is normative is not only common and accepted in society, but viewed as the "right" and "proper" behavior. In the U.S. and much of the world, whiteness is normative, as is cisgendered heterosexuality.

Microaggressions - The everyday verbal, nonverbal, and environmental slights, snubs, or insults, whether intentional or unintentional, which communicate hostile, derogatory, or negative messages to target persons based solely upon their marginalized group membership.

Microinvalidations - Characterized by communications that exclude, negate, or nullify the psychological thoughts, feelings, or experiential reality of people from marginalized groups.

Microinsults - Characterized by communications that convey rudeness and insensitivity and demean a person’s identity. Microinsults represent subtle snubs, frequently unknown to the perpetrator, but clearly convey a hidden insulting message to the recipient from a marginalized group.

Stereotype Threat (Identity Threat) - Stereotype threat refers to being at risk of confirming, as self-characteristic, a negative stereotype about one's group. This term was first used by Steele & Aronson (1995) who showed in several experiments that Black college freshmen and sophomores performed more poorly on standardized tests than white students when their race was emphasized. When race was not emphasized, however, Black students performed better and equivalently with White students. The results showed that performance in academic contexts can be harmed by the awareness that one's behavior might be viewed through the lens of racial or gender stereotypes.

Gender - Socially constructed roles, behaviors, activities, and attributes that a given society deems masculine or feminine. This social construct is often linked to and confused with the biological construct of sex.

Sexism - a system of oppression that privileges men, subordinates women, and devalues practices associated with women.

Sexual Harassment - Unwelcome sexual advances, requests for sexual favors, and other verbal or physical harassment of a sexual nature. Harassment does not have to be of a sexual nature, however, and can include offensive remarks about a person’s sex. For example, it is illegal to harass a woman by making offensive comments or jokes about women in general.

Cisgender - individuals whose gender identity and expression line up with their birth-assigned sex.

Cissexism - The system of oppression that values cisgender people, upholds the gender binary, and marginalizes, oppresses, and makes invisible the lives and experiences of transgender people.

Heterosexism - the individual, societal, cultural, and institutional beliefs and practices that that favor heterosexuality and assume that heterosexuality is the only natural, normal, or acceptable sexual orientation. This creates an imbalance in power, which leads to systemic, institutional, pervasive, and routine mistreatment of gays, lesbians, and bisexuals.

Ableism - A system of oppression that includes discrimination and social prejudice against people with intellectual, emotional, and physical disabilities, their exclusion, and the valuing of people and groups that do not have disabilities.

Transgender - an umbrella term for people who do not identify with their birth-assigned sex and/or whose gender expression does not conform to the societal expectations. Trans* is used as an inclusive abbreviation. Transsexual – people who change their presentation to express their gender identity. Examples of these transitions might include: changing one’s name, pronouns, hair, or manner of dress, and medical transitions, like gender affirmation surgery, hormone replacement therapy.