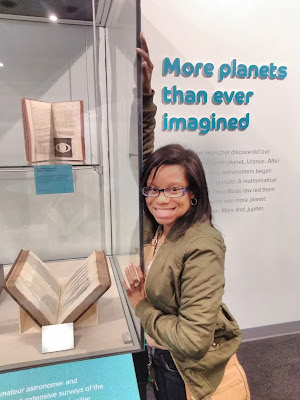 We have just finished celebrating Black History Month, and one of the most iconic events for the astronomy community happened on Twitter: the highlight of 53 Black junior astronomers by Ashley L. Walker. Junior astronomers already don't receive as much recognition as more senior members in the field, and Black astronomers receive much less. By highlighting these individuals, Ashley proved that there are already Black astronomers who are interested in and doing amazing research in astronomy. Now it's our job to make sure we retain them in the field. In our interview below, we asked Ashley about her motivation for this very important project.

CSMA: First, congratulations on your amazing accomplishment, highlighting OVER 50 black astronomers in a single month! How do you feel about achieving that?

Ashley: Thank you. I really didn’t think that I was going to highlight over 50 Black Junior Astronomers. I’m really excited that I got a chance to share the culture of Black astronomy and making it a safe space.

CSMA: What made you decide to launch this initiative?

Ashley: I knew that Black History/Future Month was coming up and I wanted to pay homage to our African ancestors. Particularly, the ones that have died during the middle passage, during the civil war, and other horrific events leading up today’s society who could’ve been astronomers. I wanted to do something special for the unknown Black astronomers and thought that it would be awesome to highlight the current students that are studying astronomy. There’s ONLY 1% of Black people in Astronomy and I’m ready to fix that!

CSMA: How did you find all the Black astronomers you've featured?

Ashley: I actually knew a great majority of them personally but I did request that people message me via Twitter or add comments with names of people that are astronomers for the ones that I didn’t know. Some of them were even international students as well.

CSMA: What were the challenges you faced in putting together these highlights?

Ashley: I’m currently an undergraduate senior Chemistry major at Chicago State University. Finding time was definitely hard in-between studying, working, attending a conference, two Adler planetarium events (being on a panel for Adler After Dark “A Night in the Afrofuture” and the pop-up program), currently working on my project with the Horst Phazer Lab group at Johns Hopkins University along with writing about the project for my senior thesis. I was definitely doing a lot of science communication while highlighting students. Also, some of the students were busy as well.

CSMA: What do you hope will be the outcome of elevating fellow Black astronomers?

Ashley: I hope that people recognize that Black people are awesome!  This initiative should encourage others who are in positions of power whether for REUs, graduate and/or post-doc applications to recognize these individuals for their contributions to astronomy.

CSMA: What outcomes have you already seen?

Ashley: I have received A LOT of positive feedback. Hopefully, this will encourage others to go into astronomy related fields, whether it’s traditionally or non-traditionally.

CSMA: How effective was Twitter as a medium for your work? Would you ever consider turning this into a website, news/magazine article, or book?

Ashley: This was REALLY effective! This brought awareness of the students that aren’t normally shown. A LOT of the time that I do speak out, there’s a certain person (which I highlighted) that I ALWAYS think of. I REALLY am grateful for this opportunity.

Yes, I would! So many people have asked me this. I’m definitely going make this into a website!

CSMA: How do you envision continuing or building on this initiative?

Ashley: I’m going to continue highlighting Black junior astronomers for BHM in October for the UK! So there will be a continuation.

I plan on making this into a mini-comic book series. I want to inspire Black and Brown students. If you see more representation in the classroom or even reading a book, then you’ll have a good outcome of students wanting to become astronomers.

CSMA: What advice do you have for others interested in promoting underrepresented astronomers or scientists?

Ashley: Continue highlighting students and people of color, invite them to outreach programs, diversity and inclusion talks, receive feedback from their perspectives.  Make spaces for them to be able to feel comfortable and succeed in astronomy/STEM fields. Put them in positions to win!


Media platform "SisterSTEM" also witnessed the highlights and made a collection of all of the Black junior astronomers Ashley highlighted. Check it out below and be sure to follow these amazing astronomers.


Thank you for your important work and contributions to the field of astronomy, Ashley!

Black Astronomers You Should Know - by Ashley Lindalía

Ashley L. Walker is a native of Chicago, IL. She is a candidate for a Bachelor’s of Science in Chemistry in her senior year at Chicago State University (CSU) and a recipient of the Chi Sci scholarship. She has worked on galaxy surveys with the Undergraduate ALFALFA (Arecibo Legacy Fast ALFA) survey team, astrochemical scavenger hunts, and Hydrogen Cyanide in Protoplanetary Disks at the Banneker & Aztlán Institute. She is interested in astrochemistry with a focus on the early stages of planet formation. Currently, Ashley is conducting an internship at Johns Hopkins University with Dr. Sarah Hörst as her advisor. Her projects focus on Venus as well as Saturn’s moon, Titan. Recently, she was selected for and gave a talk at Science Speaks Chicago at the Adler Planetarium. Networking is one of Ashley’s strongest skills along with mentoring, activism, and leadership. She hopes to inspire a new generation of scientists, encouraging teenagers, adults, and Black women to continue their education regardless of their background and other obstacles in life.

Posted by Brianna Thomas at 4:09 PM