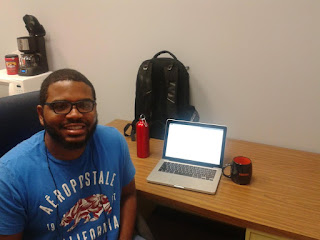 The fourth TAURUS scholar spotlight of the summer focuses on Gerlinder Difo Cheri, a rising senior at the University of the Virgin Islands. Gerlinder is working with Andrew Vanderburg this summer, searching for evidence of planetary destruction around the burned out remnants of stars like our Sun.
Gerlinder Difo Cheri joins us at the University of Texas at Austin from more than two thousand miles away in the US Virgin Islands. Coming to UT Austin poses both challenges and opportunities by virtue of the university’s sheer size: the number of students at UT Austin (about 51,000) is a bit more than half the total population of the US Virgin Islands (100,000). This summer, Gerlinder is making the most of the opportunities and resources in pursuit of his goals and ambitions.
Gerlinder grew up on a steady diet of science- and technology-related media. He recalls being inspired at an early age by scientists he saw on television, like Bill Nye the Science Guy, who “just went out and solved things.” Gerlinder’s interest in astronomy seemed natural to him. “How can you not be interested in astronomy?” he asks. These science and engineering role models drove him to enroll at the University of the Virgin Islands (UVI) and begin studying computer science.
Once he arrived, Gerlinder found the professors at UVI to be valuable role models as well. Before enrolling there, his role models were scientists and engineers (fictional or otherwise) he saw on television, ranging from Neil Degrasse Tyson to Tony Stark. But when he arrived at UVI, for the first time he met people who lived on his island and were pursuing his passion. Gerlinder found it indispensable to ask his professors about the challenges and struggles they faced.
Despite Gerlinder’s interest in astronomy, he was unable to dive in to the subject when he first enrolled at the UVI because the school did not offer any astronomy courses at that time. So when UVI offered their first astronomy class ever, Gerlinder immediately signed up. From there, Gerlinder took a leap and applied to be a TAURUS scholar at UT, which brought him here.
“The future of astronomy is beautiful and expansive,” Gerlinder says. He sees and values how astronomy can capture the public imagination, like how his imagination was captured as a child learning about science and technology from communicators on television. He recognizes, however, that initiative is required to overcome barriers. When asked what advice he might give to a younger student in a similar position to himself, Gerlinder says “You have to actively search for what you want to do, and don’t just wait for it to fall into your lap." If you take the first step, you might just find yourself studying the stars.

Spotlight shared by Prof. Caitlin Casey, director of the TAURUS program.
Posted by Adam Burgasser at 11:46 AM