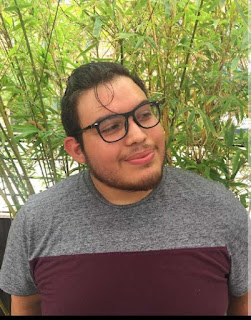 The third TAURUS Scholar Spotlight of the summer is about Oscar Cantua, who is a physics major at the University of Texas San Antonio, just 100 miles down the road from UT Austin.  Oscar is working with Dr. Jorge Zavala this summer on the characterization of some of the Universe's most luminous and dusty galaxies.

Oscar Cantua joins TAURUS from a familiar institution that is also a part of the UT System: the University of Texas at San Antonio. Despite being less than 100 miles from his hometown and in the same educational system, Oscar says that this summer's research experience represents a new world of opportunities to pursue his future career in astronomy.

Oscar’s interest in astronomy goes back to his childhood, when he first moved to the US from Mexico and used to read a lot of books to learn English. He realized that science books, and particularly astronomy-related storiesm were the most interesting to him. Some years later, astronomy went from being a hobby to a potential professional career after he spent a summer working at the NASA Johnson Space Center (yes, NASA!) as part of the Texas High School Aerospace Program. Now at UT San Antonio, Oscar is a physics major with a minor in astronomy.

Oscar is part of the UT San Antonio's Top Scholar program, which combines a comprehensive four-year merit-based scholarship with personalized experiences in academics, leadership and community service. Thanks to this opportunity, he was able to get involved in scientific research early in his college career, analyzing data from the Chandra X-ray Observatory to study the nature of binary systems in nearby galaxies, under the supervision of Prof. Eric Schlegel. This summer, Oscar is jumping wavelengths from the very short and energetic part of the spectrum to the longest-wavelength observations achieved with the most powerful radio telescopes in the world, in order to identify and study the most distant dusty star-forming galaxies in the Universe.

Looking back on the past, Oscar realized that it has not been easy to reach this point in his professional life.  He is a first-generation college student, living far away from his family, and having to work while studying. Now he is closer to his dream of going to graduate school, not only with passion and enthusiasm for astrophysics but also with abundant knowledge and experience.

Oscar's advice to young people, particularly to those belonging to underrepresented groups like him, is simply "never stop chasing your dreams.”

Posted by Adam Burgasser at 9:58 PM